Belgium is a nation with a great ethnic-cultural plurality, a fact that is reflected in the number of official languages: French, German and Dutch. While bathed by the North Sea to the west, the country also borders other EU members like France, Luxembourg, Germany and the Netherlands.

The country is densely populated, but the majority of Belgians (around 97%) live in urban areas. Belgium has two important rivers, the Scheldt and Meuse, and most of the region is influenced by a temperate climate, with average temperatures of 25 °C in summer and 7 °C in winter.

The Belgian city with the highest population density is Antwerp, also the country’s main commercial port. The country also sits in the top-20 on the Human Development Index (HDI), and the population has a high standard of living.

Although not as eccentric as neighbouring Holland, large as Germany or glamorous as France, Belgium still boasts its own peculiarities that attract visitors year-round. The country is known for its delicious chocolates, high-quality beer, Hergé’s Tintin, and noteworthy plastic artists – features that draw the attention of many non-EU travellers. 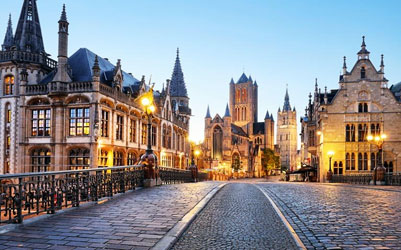 The most famous touristic destinations lie in the northern region of Flanders. Bruges, known as the Venice of the North, features various picturesque canals and medieval squares, as well as beautiful museums like the Groeninge. In Antwerp, stands the house where Rubens (the greatest Belgian plastic artist of the 17th century) was born and the diamond district.

Meanwhile, in French-speaking Wallonia, it is worth knowing the medieval beauty of Namur and the waters of Spa. However, it is the capital, Brussels, that holds the best of both sides. Besides the Grand Palace, the Atomium and the Manneken Pis, the city also plays an important role as the administrative capital of the European Union.

Belgium was one of the countries to pioneer the creation of both the Schengen Area and the European Union. Belgium has been an EU member since 1958, signed the Schengen Agreement in 1995 and nowadays Brussels is considered the EU’s political capital. Moreover, the country also hosts the NATO headquarters and together with the Netherlands and Luxembourg, Belgium forms the Benelux – a free-trade agreement involving these three nations.

As part of the Schengen Area policy, its citizens of its Member States are free to move around anywhere on the European territory. Similarly, a series of non-EU countries were granted a spot in the visa-waiver agreement list, which allows them to visit the European Union without applying for a visa. 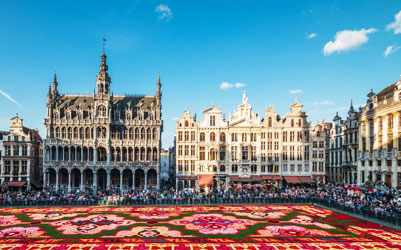 However, due to a series of terrorist attacks that took place in the country over the last few years, the Belgian government was prompted to improve its internal security. Hence, Belgium has been working together with other Schengen Countries to implement legislative measures that would reinforce immigration control. One of this systems is the ETIAS (European Travel Information and Authorization System), which is planned to commence in 2021.

This new immigration system will require that all non-EU nationals who are in the Schengen waiver agreement (including Canadians) apply for an electronic authorization prior to their departure to Belgium. After completing the online application and paying the processing fee, travellers should wait an average 72 hours for a response from the ETIAS system. If accepted, this will grant visitors the permission to travel in Belgium and across the Schengen Area for up to 90 days in every period of 180 days.

Canada and Belgium have had great bilateral relations for many years. Aside from sharing values of democracy, tolerance, and respect for human rights, both countries are also officially multilingual and have federal political systems.

During the First and Second World War, Canada also contributed to the liberation of Belgium, creating a friendship that, nowadays, reflects on their foreign policies. As an example, both countries maintain solid cooperation at the United Nations, La Francophonie, and the North Atlantic Treaty Organization.

Moreover, the geographical and political position of Belgium in the EU, as well as that of Canada in North America, are important factors in the countries’ political dialogue. While Canadian companies are granted access to the European market via Belgium’s ports, it also provides Belgium with a gateway to the North American market. This economic exchange has been facilitated by the CETA (Comprehensive Economic and Trade Agreement) – an application established in 2017 that cuts tariffs on Belgian exports to Canada by 98%.

Since 2007, after the signing of a youth mobility agreement, young Belgians and Canadians have been granted the opportunity to visit and work on each other countries for up to a year. This bilateral agreement – together with others in the areas of social security, air transportation and reciprocal recognition of drivers’ licences, for instance – has strengthened the bond between the two countries on a social level, too.

The Embassy of Canada in Brussels, Belgium