As one of the most developed countries in Europe, Denmark is bathed by the Atlantic and bordered by Germany to the south. Its territory is extremely flat and comprises the Jutland peninsula as well as 406 islands among which are two external territories: the Faroe Islands and Greenland, which is considered the largest island in the world. The country’s main island, Zealand, is separated from Sweden by a strait whose banks shelter Copenhagen.

This Scandinavian nation has one of the highest Human Development Indexes (HDI) in the world, with an effective social security system and services of sanitation serving all residences of the country.

Despite importing a great part of the raw material used in production, the country has a great modernization in industrial activities, especially in the segments of electronics, shipbuilding and machinery. Interestingly, Denmark is a kingdom, ruled until 2018 by Queen Margaret II and Prime Minister Anders Fogh Rasmussen.

Despite cultural bonds with its Scandinavian and Schengen neighbours, Denmark has carved its own identity over the past few years, especially in the field of design and gastronomy. With environments that range from the modern to the classic and various cultural and entertainment activities, Denmark is high on the list of Canadian travellers.

A complete trip to Denmark involves exploring the country’s beautiful scenery as well as its historical cities and their architecture. While in Copenhagen, a visit to the Nyhavn quay is a good way to feel the city’s past merge with the present. Alternatively, it is worth checking out the palaces of Amalienborg, Christianborg, Frederiksborg and the castle of Kronborg. 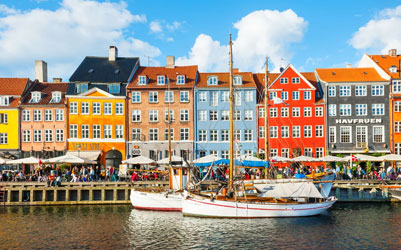 Denmark is well connected to other Schengen Countries, so travellers who enjoy the visa-waiver agreement can easily take a train or ferry to Sweden, Germany or Norway.

As the oldest Scandinavian EU member, Denmark joined the European Union in 1973 together with Ireland and the UK. In 1996, Denmark, Sweden, Iceland, Finland, and Norway signed an agreement to abolish internal European borders, and in 2001 Denmark becomes an official member of the Schengen Area.

From then onward, all EU citizens and other non-EU travellers who visited Denmark (Canadians alike) no longer needed to present their national ID or passport when travelling to/from another Schengen country.

Since 2015, however, after the spark of terrorist attacks and immigration crisis in various Schengen Countries, Denmark announced it would reestablish border controls within Schengen territory. That is why the Danish government has been one of the advocates for creating new immigration policies that would improve internal security and fight illegal immigration.

As discussions for the implementation of the ETIAS proceed, Canadians who plan to visit Denmark as of 2021 will most likely have to apply for a pre-travel authorization. Such procedure will also affect nationals of other 50 countries which are exempted of a Schengen visa – like Argentina, Japan, Australia, and the U.S.
Similarly to the Canadian ETA, the ETIAS will be an online and automatic authorization aimed at travellers above 18 years old. Once the application has been submitted and the processing fee paid, applicants should have to wait no longer than 72 hours for a response.

If accepted, the ETIAS will provide Canadians to visit Denmark for tourism only and within a maximum of 90 days in any 180-day period. The authorization will be valid for 5 years, or until the designated Canadian passport expires.

The relationship between Canada and Denmark goes back a long time, through historical and cultural ties between the Inuit communities of Canada and Greenland. Despite being Danish territory, Greenland enjoys a self-government system, which gives it great political autonomy. Being so close to Canada, it is only natural that Greenland sees its neighbours as important partners in international linkages.

As for Denmark and Canada, they have been allies in the NATO and partners in a series of measures aimed at improving international security, democracy-building, social and economic development, as well as conflict resolution. They are also active members of the Arctic Council, working together on issues concerning northern communities.

Because of Denmark’s close ties to the European Union and other developed Scandinavian countries, the Canadian government nurtures their political and trade relations. Likewise, Canada represents a door to North America, which encourages the Danish government to discuss bilateral measures that benefit both nations.

The implementation of the ETIAS for Canadians from 2021 will not change much in the Canada-Denmark migratory relations. Until 2018, Canadians have enjoyed a Schengen visa-waiver policy which allows travellers to visit Denmark for up to 3 months without applying for a visa. All that will happen after the ETIAS commences is that Canadians will have to submit an online application – much like Danish citizens do with the ETA when coming to Canada.

Hence, despite such imminent changes to the Schengen immigration policy, Canada and Denmark are expected to maintain their close bonds and carry own with strong bilateral agreements.

The Embassy of Canada in Copenhagen, Denmark

The Embassy of Denmark in Ottawa, Canada

Consulate of Denmark in Calgary, Canada

Consulate of Denmark in Edmonton, Canada

Consulate of Denmark in Halifax, Canada

Consulate of Denmark in Vancouver, Canada

Consulate of Denmark in Winnipeg, Canada