Located on the far northeast of Europe, Estonia borders Russia, Latvia, and is bathed by both the Baltic Sea and the Gulf of Finland. The country has more than 800 islands, the largest being Saaremaa and Hiiumaa.

The population of Estonia has several cultural characteristics similar to Finland, and the nation was once part of the USSR. After a plebiscite held in 1991, the USSR recognized the autonomy of Estonia and the country became independent on 20 August of the same year.

Estonia is one of three Baltic countries (together with Latvia and Lithuania) members of both the EU and Schengen Area. Unlike most of the former USSR nations, Estonia is not a member of the Commonwealth of Independent States (CIS). Instead, the country approached Finland and Sweden in trade relations.
Estonia has a solid economy, with the services sector being the main responsible for the national economy. Well-known startup companies like Skype and Toggl were created in Estonia.

Estonia is increasingly becoming a modernized and progressive European country. Although the Estonian language is closely related to Finnish, Estonian culture is also heavily influenced by other Nordic countries and Germany.

Easily reached from Helsinki or Saint Petersburg by ferry, the capital Tallinn is both Estonia’s main port of entry and most visited city. Because it is part of the Schengen Area, travellers who come to Tallinn from other Schengen countries by land or sea don’t need to go through passport control. 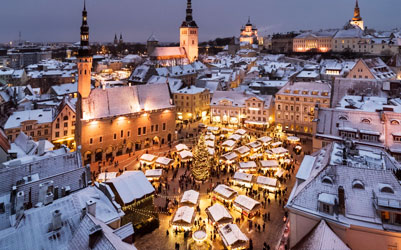 Tallinn’s Old Town was granted the title of World Heritage of Humanity by UNESCO and is undoubtedly the highlight of the city. Much of Old Town is still surrounded by the ancient defensive walls that, in a way, separate it from the modern districts of the capital. Tallinn features an array of pleasant cafés, the 14th-century Gothic town hall and a pharmacy, the Raepteek, which opened in 1422.

When compared to countries like Germany, Portugal, or Italy, Estonia’s introduction to the EU happened quite late. The country joined the European Union in 2004 together with another 10 European countries.

Estonia has been a part of the Schengen Area since 2007 – a move that has propelled the country’s tourism industry. Once the Estonian government signed the Schengen Agreement, nationals from more than 50 visa-exempt countries – such as Canada and Australia – were allowed to visit Estonia for short-term journeys. 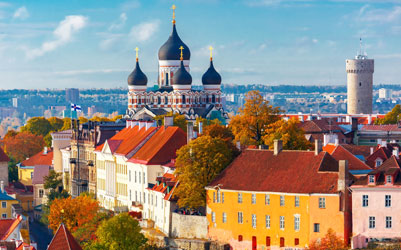 Being a member of the European Union, Estonia has been active in the discussions for the introduction of a new legislative tool to deal with ongoing immigration crisis and terrorist attacks. Hence, the Estonian government has been deeply concerned with optimizing the implementation of the ETIAS starting in 2021. Because of its strong involvement, the EU has chosen to place the EU Agency headquarter in Estonia, which means the ETIAS system will be managed from Tallinn.

The European Travel Information Authorization System will serve as a pre-travel application process, allowing EU authorities to identify potential threats to the safety and health of the Schengen Countries. Since Estonia abides by EU policies, it will also implement the ETIAS as an immigration measure.
Although citizens of countries who are required to apply for an Estonian visa will not be affected, those who are on the Schengen visa waiver list will. Therefore, commencing in 2021, Canadian passport holders will have to undergo the ETIAS application process in order to visit Estonia.

Because Canada was one of the first countries to recognize Estonia’s independence, their bilateral relations have been strong and continuous since after WWII. After 1945, Canada also welcomed many Estonian refugees who have turned the country into one of the largest Estonian diasporas.

Canada and Estonia have excellent relations in organizations such as NATO and the United Nations. Because of its position as a Baltic state and shared interests, Canada has maintained strong political and trade ties with Estonia.

Canada has no embassy in Estonia, so all immigration-related queries should be directed to the Canadian Embassy in Riga, Latvia. Alternatively, small matters can be taken to the embassy office in Tallinn, Estonia. The Embassy of Estonia in Canada is situated in Ottawa, but consulates can be found in Ontario, British Columbia, Quebec, Alberta and Nova Scotia.

Over the past few years, Canada and Estonia have promoted cultural exchange through a number of university student exchange programs through universities. In tourism, Canada has been a part of the Schengen visa-waiver agreement, which allowed travellers to visit Estonia visa-free for up to 90 days.

With the introduction of the ETIAS, Canadians will have to submit an electronic application, just like Estonians do with the Canada ETA. Likewise, the ETIAS will be an automatic system, only taking around 72 hours to generate a response and, if accepted, grant the authorization.

Canadian travellers above the age of 18 will be required to apply for an ETIAS at least three days prior to departing Canada. The authorization will be valid for 3 years or until the designated Canadian passport expires.

The Embassy of Canada in Tallinn, Estonia

The Embassy of Estonia in Ottawa, Canada