Greece is an EU member situated in the southern tip of the Balkans, in southeastern Europe. The territory of Greece covers the mountainous peninsula of the Peloponnese and about two thousand islands in the Aegean and Ionian seas. Greece is the only Schengen country in the Balkan region and borders non-Schengen Bulgaria, Albania and Turkey.

The country is considered the cradle of Western civilization, philosophy, literature, dramaturgy as well as the modern idea of democracy. Greece has more monuments of antiquity than any other European nation. Among them are several sites of humanity, such as the Archaeological Site of Olympia, where the Olympic Games were born; the Oracle of Delphi, a place of worship to the God Apollo; and the Acropolis, set in the heart of Athens.

Greek historical wealth, together with its natural beauties attracts millions of visitors from Europe and non-EU nations, making tourism one of the main economic activities of the country. Because of its idyllic soil and climate conditions, Greece is one of Europe’s main producer of grapes and olives, exporting products worldwide.

This modern EU country is covered with footprints of ancient civilizations that have built, over millennia, an architectural, philosophical and cultural heritage whose value can’t be measured. Visitors find examples of that along the vibrant streets of the capital, Athens, as well as in the blue domes and dizzying landscapes of Santorini. 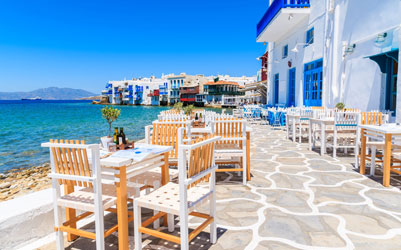 Greece is known for its welcoming people, rich culture, and beautiful islands that dot the Ionian, Mediterranean, and Aegean sea. On the mainland, the imposing mountains of the Peloponnese and the rocks of Meteora contrast with the famous beaches of Mykonos.

Many Canadian travellers also come to Greece for the rich and varied cuisine, which goes from the classic horiatiki salad to the incredible seafood dishes, amazing wines and the peculiar ouzo. Because it is somewhat far away from other Schengen countries, most non-EU visitors who come to Greece tend to spend most of their 90-day visa-waiver period travelling around the country.

In 1981, Greece became a member of the European Union, and in 1992 it signed the Schengen Agreement. Once border controls between Greece and other Schengen countries were abolished in 2000, Greece’s part on the Schengen Area was officialized.

Because of its location by the Mediterranean, Greece has always been of the main refuges for migrants from Africa and the Middle East. As a way to manage these waves of migration, the Greek government together with the EU and the UN set up the First Reception Services in 2013. This program was aimed at identifying and checking the health situation of refugees arriving at Greek borders.

However, after the outbreak of the Syrian war in 2016, Greece has been dealing with even great influxes of migrants. This growing number of uncontrolled and unregistered arrivals has thus prompted Greece to support the EU initiative for the creation of a new migratory system.

After discussions in the European Commission, a new measure, named ETIAS, has been chosen to regulate the transit of visitors in the Schengen Zone. From 2021, the ETIAS will be a requirement for all passport holders of more than 50 countries which are eligible to the Schengen visa-waiver agreement. However, the ETIAS is not a visa, rather an electronic authorization. This means Canadian travellers coming to Greece or any other Schengen Country after 2021 will be able to apply for the ETIAS online – much like the majority of EU citizens do with the Canadian eTA. The ETIAS will give non-EU citizens a pre-travel authorization to visit Europe for touristic purposes, but the final decision is up to the border official.

Canada and Greece have held strong diplomatic relations since 1942. Greece and Canada share various interests and objectives on a global scale, which makes their cooperation active and friendly. The two nations work together in organizations like the UN, La Francophonie, and NATO. Canada and Greece have established a series of treaties to set the framework for international issues as well as economic relations – such as the Convention for the Avoidance of Double Taxation.

Greece and Canada are also strongly linked in a cultural sphere, with almost 300,000 Canadians claiming Greek descent. This deeper bond between both nations has had a great impact on the tourism industry, where an average of 100,000 Canadians visits Greece every year. After the establishment of the Canadian-Hellenic Chamber of Commerce in 1996, the commercial relations between both countries have also strengthened.

Since 1998, Canadian and Greek universities have been cooperating through a variety of exchange programs, which encourages students from both countries to enrol in short and long-term courses. After an outbreak of terrorist attacks around the world in 2016, Canada created the eTA – an electronic authorization system for a series of eligible countries, including Greece.

In a similar way, Greece and the other Schengen Member States also felt the need to re-work their migratory processes and improve their border control systems. Hence, the EU decided to implement the ETIAS (European Travel Information and Authorization System), which will come into force as of 2021. Although travel regulations won’t change much, all Canadian passport holder shall have to apply for an ETIAS in order to visit Greece after 2021.

The Embassy of Canada in Athens, Greece

Consulate of Canada in Thessaloniki, Greece

The Embassy of Greece in Ottawa, Canada

Consulate of Greece in Toronto, Canada

Consulate of Greece in Vancouver, Canada