Located between Estonia and Lithuania, Latvia is a Baltic country, a member of the European Union, and a part of the Schengen Area. Unlike many other ex-Soviet nations, Latvia didn’t become a join the Commonwealth of Independent States (CIS) after its independence in 1991.

Approximately 45% of the territory of Latvia is covered by forests, but the country also has a marshy coastline encompassed by sand dunes and several caves, especially in the city of Sigulda. Such physical characteristics open doors for the development of eco-tourism in the country.

Most of Latvia’s economic activities have developed in the agriculture sector, which is based on beet, cereal and potato crops. However, Latvia also has a strong industry in the segments of textiles, timber, and machinery.

The national population enjoys a good quality of life, and the Latvian Human Development Index is considered high by international standards. Inspired by the high levels of education of its EU neighbours, Latvia’s illiteracy rate is one of the lowest on the planet.

Most visitors come to Latvia either to enjoy its incredible natural ecosystems of dense forests and Baltic sea beaches or to see the capital Riga. Back in 2014, Riga was the European Capital of Culture, and the city’s Old Town was named a World Heritage Site by UNESCO.

The fact that Latvia is now an EU member and part of the Schengen Zone has definitely helped the tourism industry of the country grow. Still, the influx of tourists in Latvia is not as high as France, Italy, or even neighbouring Estonia. 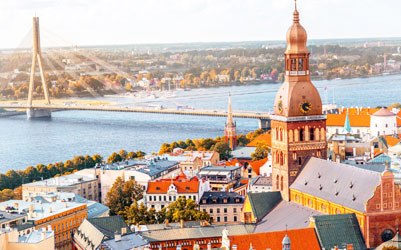 Although most European citizens and non-EU visitors tend to stick around Riga during their visit to Latvia, other cities are also becoming well-known. The Turaida Castle, the Agnola Basilica, and the Ventas Rumba waterfall are other highlights in Latvia.

Because Latvia is a Schengen country, nationals of Canada, Australia, and the US, for example, don’t need to apply for a visa when travelling to Riga for less than 90 days in a 6-month period.

In 2004, a series of East European countries, including Hungary, Latvia, and the Czech Republic, enrolled in the European Union. In 2007, together with the Czech Republic, Poland, Malta, Slovenia, Slovakia, Hungary, and the other two Baltic States (Estonia and Lithuania), the Republic of Latvia became a member of the Schengen Area. 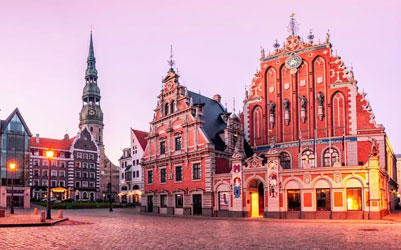 Since joining both treaties, Latvia has done an outstanding job in meeting the demands established by both the Schengen and European Union. Likewise, when the European Commission announced the search for new migratory tools and policies, Latvia supported the initiative. After months of discussion, the Commission proposed the introduction of a new border control system for non-EU citizens, named ETIAS.

Because Latvia abides by all immigration-related policies of the Schengen Agreement, it doesn’t require nationals of visa-exempt countries to apply for a visa when visiting Riga. However, with the implementation of the ETIAS starting in 2021, Canadians, Americans and other 50 plus nations will have to apply for an ETIAS before travelling to Latvia. Moreover, Latvian authorities will be given access to the ETIAS database, so to know who is coming in and out of the Schengen Area.

The ETIAS will involve filling out an online application form, paying a processing fee, and submitting any other documents requested by the system. Once the ID check has been performed, the applicant will have a response within 72 hours. If granted, the ETIAS will be valid for 5 years, during which time the bearer may travel to Latvia or any other Schengen country for periods of up to 3 months in every 6 months.

The relationship between Canada and Latvia has been healthy and consistent over the past decade, with meetings and new partnerships happening every so often. When Latvia restored its independence in 1991, Canada was one of the first members of the G7 to recognize the country. Similarly, Canada never recognized the annexation of the Baltic States by the Soviet Union.

Aside from having cultural bonds through an active community of Latvian descents in Canada, both nations also collaborate in the NATO and at the UN. A series of bilateral agreements were arranged between Latvia and Canada, such as the Youth Mobility Agreement, the Avoidance of Double Taxation, and so forth.
Latvian passport holder coming to Canada for no longer than 90 days should apply for an eTA prior to their departure. If they wish to stay longer in Canadian territory, Latvian nationals are required to contact the Canadian Embassy in Riga.

On the other hand, because Canada is enrolled in the Schengen visa-waiver program, Canadian citizens don’t need a visa to travel to Latvia for short-term tourism. However, beginning in 2021 a new immigration system will be introduced to all Schengen Member States – the ETIAS.

Although this new system will not change much of the travel regulations for Canadian nationals, it will require that all Canadian travellers (and any other visa-exempt citizen) wishing to visit Latvia as of 2021 bear a valid ETIAS authorization. Once their ETIAS has been approved, Canadians will be able to travel in and out of Latvia and any other Schengen country for a period of 3 months in every 6-month interval.

The Embassy of Canada in Riga, Latvia

The Embassy of Latvia in Ottawa, Canada

Consulate of Latvia in Quebec, Canada

Consulate of Latvia in Edmonton, Canada