Luxembourg is a small EU country in Western Europe, also part of the Schengen Zone. The country’s official name is Grand Duchy of Luxembourg, and its territory is surrounded by other Schengen Member States – Germany, Belgium, and France.

Luxembourg’s geographical position is extremely favourable for economic activities with major European countries including Germany, France, the Netherlands, Belgium. Hence, Luxembourg stands out as an international financial centre, noted for its political and economic stability.

The country has great economic development and receives foreign investment in the service sector and industry. Until the 1970s, the industrial sector was based on the steel industry. However, this activity has been declining. On the other hand, the financial sector has been strengthening and is responsible for a big share of the national GDP.

As with most EU countries of Western Europe, Luxembourgians enjoy an excellent standard of living, and according to UN data, Luxembourg ranks 24th in the world ranking of Human Development Index (HDI).

The region where Luxembourg is located – between Germany, Belgium and France – was historically inhabited by Frankish tribes and later incorporated into the Holy Roman-German Empire of Charlemagne.

In 963, the Count of Ardennes founded the country, which decades later gained independence as a Grand Duchy. In 1948, Luxembourg established a customs union with Belgium and Holland, known as Benelux.

In the capital, Luxembourg City, lies the Grand Ducal Palace, a beautiful palace located next to Place Guillaume, the main square of the city. The Church of Notre Dame is not as famous as the French one but retains the charm of a 17-century building. Visitors who enjoy hiking should check the Chemin de La Corniche, a promenade that features breathtaking views of the city. 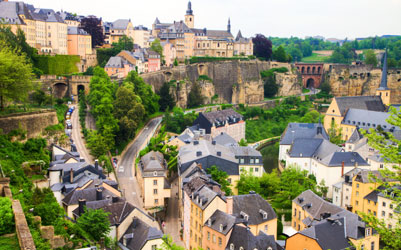 Despite being Schengen territory, Luxembourg is not usually the first or final destination foreign travellers, like Canadians or Americans for example. Thus, most visitors arrive in Luxembourg by train, often coming from Paris, Amsterdam, or Brussels. 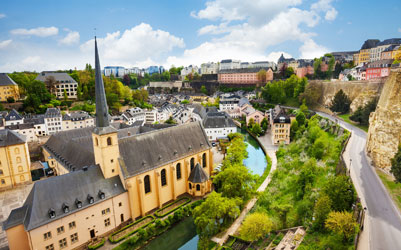 Europe has been compelled to redesign its immigration policies following the 2015 series of terrorist attacks in France and Belgium, as well as the escalation of the Syrian immigration crisis in 2016. As a means to address immigration-related issues, Luxembourg and other European nations began discussing alternatives to enhance internal security. One of the measures proposed by the European Commission was a reform in legislation and the introduction of a new entry/exit system, the ETIAS.

The government of Luxembourg has supported the implementation of the ETIAS and together with the other Schengen Member States it plans to introduce the new systems in 2021. Similar to the U.S. ESTA, the European Travel and Information Authorization System will gather personal and travel information from non-EU travellers before they arrive in the Schengen territory. This will allow authorities from Luxembourg and other EU nations to identify potential threats to the health and safety of the European community.

The ETIAS system will be directed to nationals of countries which are part of the Schengen visa-waiver agreement, like Canada and Australia. Hence, EU citizens travelling to Luxembourg will not need an ETIAS and can continue to visit the country visa-free.

The relationship between the Grand Duchy of Luxembourg and Canada began in the World War II when Canada hosted the Grand Duke’s family during the German invasion in 1940. Since then, bilateral relations between both nations have strengthened at a fast pace.

On international issues, Canada and Luxembourg have similar perceptions and collaborate in the development of many political and social matters. The two countries are partners at the United Nations, the NATO, and the Organization for Security and Cooperation in Europe. Due to its key role in the European Union, Luxembourg is a vital partner for Canada in many European-related discussions.

As for Canadian travellers visiting Luxembourg for less than 90 days, they enjoy a visa-free policy introduced by the Schengen visa-waiver program. However, given the European immigration crisis of 2016, Luxembourg and all other Schengen Member States will introduce a new entry/exit system as of 2021. The E.U. Travel and Information and Authorization System will consist of an online application which should be submitted at least 72 hours before departure to Europe. If accepted, the ETIAS will grant Canadian travellers an authorization to visit Luxembourg for up to 3 months in every period of 6 months.

The Honorary Consulate of Canada in Vienna, Austria

The Embassy of Luxembourg in Washignton DC, USA

For short term visas, please contact the Embassy of Belgium in Ottawa.