Malta is an insular Schengen territory, also part of the European Union. The archipelago is composed of five islands (Malta, Comino, Gozo, Filfla and Cominotto) located in the Mediterranean Sea, between Italy and North Africa.

Of all the islands, Malta is the largest and most important since it houses the city of Valletta, the national capital. The islands of Malta and Gozo host the oldest known human constructions, the Megalithic Temples, considered as UNESCO patrimony of humanity.

Malta is a former British colony, and it gained independence on 24 September 1964. Hence, besides being an EU and Schengen Member, Malta is also a part of the British Commonwealth. After its independence, the country has presented great economic development, with textile, naval, food and electronics industries forming the basis of the national economy. Another sector that has developed after Malta joined the EU is the tourism industry.

The population of Malta enjoys a good standard of living, and the country’s Human Development Index (HDI) is very high, with about 95% of the population being literate.

Many travellers who come to Malta are impressed by the multifaceted landscape of the archipelago. Because of its location between Sicily and Tunisia, Malta is considered as a bridge between Europe and Africa – something that has shaped its unique historical and cultural heritage.

Despite its size, Malta is a tourist destination that appeals to the many different types of travellers, both from European and non-EU countries. While Valletta is the country’s commercial and tourist hub, the lively nightlife is found in places like Saint Julian and Silema.

Alternatively, cities like Mdina or the island of Gozo (Ghawdex), have a more contemplative atmosphere. 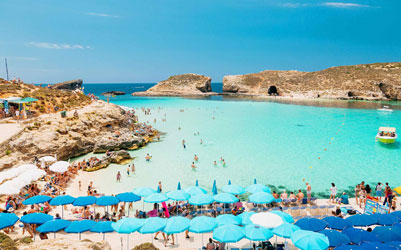 Besides its beautiful architectural and cultural heritage, Malta is also a great destination for visitors who enjoy water sports, practice golf or just want to relax in the country’s many spas.

Malta is part of the Schengen Area, which means EU passport holders are exempt from visas to visit any of the islands. Some foreign travellers who don’t hold an EU citizenship, like Canadians for example, enjoy a 90-day visa-waiver program with Schengen countries and can thus travel to Malta without applying for a visa.

Malta was part of the 2004 enlargement of the EU, which welcomed nine other European nations. In 2007, Malta joined the Schengen Area together with many Eastern European countries like the Czech Republic, Poland, and Estonia. 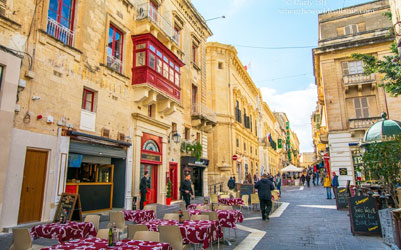 Because it is an archipelago situated in the middle of the Mediterranean Sea, Malta has always been a major immigration hotspot. After the rise of an immigration crisis in Europe, the country was one of the first stops of migrants coming from northern Africa into EU territory. Malta has also hosted a series of refugees over the past decade, and in 2013 the country set up the First Reception Services as a means to manage and assist refugees entering Maltese territory.

Due to the increasing number of illegal immigrants arriving in the islands, the government of Malta has supported the introduction of a new immigration system proposed by the European Commission. This new measure, named ETIAS, will commence in 2021 and cover the entire Schengen territory.

The main objective of the ETIAS is to regulate the influx of non-EU travellers into the Schengen Zone by requiring visitors to provide personal and travel information. Once the information is submitted via the ETIAS online application form, it will be cross-checked with other European and International security databases. Hence, if any traveller poses a threat to the security of health of the European community, Maltese authorities will be able to identify them before their arrival in Europe.

As a pre-travel authorization, the ETIAS will only be required from non-EU passport holders whose country is enrolled in the Schengen visa-waiver agreement, like the United States or Canada.

A shared view of democratic values is the cornerstone of the Canada-Malta relationship, extending to collaborations in organizations such as the UN and the Commonwealth. Moreover, the world’s largest Maltese diaspora is located in Toronto, which enhances people-to-people links between Canada and Malta.

Although Canada has a Consul in Valletta, most of the country’s relations with Malta take place in Rome. The High Commission in Washington D.C. hosts discussions and supports Malta’s interests to Canada, while the Maltese consulates in Toronto deal with travel-related topics. As part of Malta-Canada many bilateral agreements, the governments of Malta and Canada began discussing new trade links after Canada signed the CETA with the EU.

Maltese passport holders visiting Canada for business or short-term tourism have been eligible to an Electronic Travel Authorization since 2016. After applying for an eTA, travellers from Malta are granted an authorization to visit Canada for up to 90 days in every 180-day period. Although Canada enjoys a visa-free travel scheme with Malta and the other Schengen nations, this will change in 2021 with the introduction of the ETIAS.

Like the Canadian eTA, the EU ETIAS will work as an electronic authorization for Canadian citizens coming to Malta or any country of the Schengen Zone for tourism, business or transit only. Canadian nationals who have been granted an ETIAS will be allowed to travel within the territory of Schengen for a total of 3 months in every period of 6 months.

Consulate of Canada in Valletta, Malta

Address: Via Zara 30, 00198 Rome, Italy
Phone: +39 068 544 41
Email: [email protected]
Please note that enquiries regarding passport and certificate issuance, crimes, accidents, pensions and taxation, pets and vehicles are to be addressed to the Canadian Embassy to Rome, ITALY.