The small territory of San Marino is located between the provinces of Emilia-Romagna and Marche in Italy. This country occupies a region of Mount Titano – the western branch of the Alpeninos – near the Adriatic Sea.

San Marino is inhabited by around 30 thousand people, and the country is the least populous among all the member states of the Council of Europe (COE). Although San Marino is the capital, Serravalle is the city with the largest population: roughly 10,000 inhabitants.

The national economy is based on tourist activity, with approximately 3 million people visiting San Marino every year. Other important sources of financial revenue are banks, electronics industries and ceramics.
Overall, the population of San Marino enjoys a high standard of living, and the per capita income is one of the largest in the world.

There are several factors that attract travellers from Europe and around the world to San Marino. Firstly, is the fact San Marino is considered both the smallest of all the European micro-states as well as one of the world’s oldest republics – features that already makes the country unique.

Secondly, is its distinctive mountainous landscape situated on the region of Mount Titano, is cut by the rivers Fiumicello, Ausa, and San Marino.

Finally, the city of San Marino is a UNESCO World Heritage Site and its rich architecture – seen at the Palazzo Publico, Castello Della Cesta, or the Basilica of San Marion – are one of the country’s highlights. 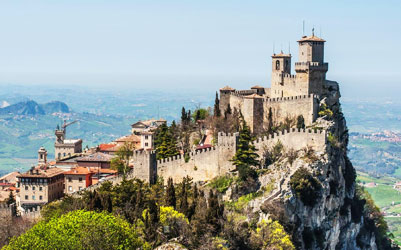 Due to its geographical location, San Marino is easily accessible by land via most cities in Italy. Also, because of its political ties with Italy, San Marino has open borders with Schengen countries and requires no visa from EU passport holders.

As an independent European Micro-State – like the Vatican and Monaco – San Marino has peculiar policies and is not a part of the EU. Although it is also not an official member of the Schengen Area, both its geographical position and close relations to Italy allows San Marino to have open borders with the other Schengen Member States. 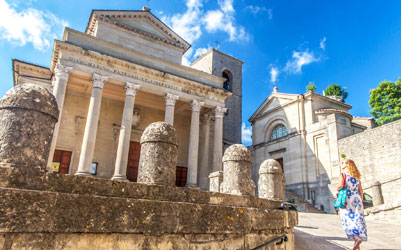 This means that EU citizens are free to enter and travel in San Marino as if it were the Schengen territory. Likewise, travellers from countries enlisted in the Schengen visa-waiver program are subjected to the same European travel regulations when visiting San Marino.

Being such a small independent territory, San Marino wasn’t directly affected by the terrorist attacks and immigration crisis that sparked in Europe in 2015 and 2016.

However, its strong ties to Italy – which is both a Schengen and EU member – makes it so that any change in European immigration policies has an impact on the country.

Hence, when the European Commission announced the introduction of a new border control system – named ETIAS – the government of San Marino supported the decision. The ETIAS consists of an online application for screening all non-EU travellers prior to their arrival at a European border.

The European Travel and Information Authorization System will be implemented in all Schengen territory, but it won’t affect travel regulations with non-Schengen EU countries. On the other hand, nationals of countries like Canada or the US, which are enlisted in the Schengen visa-free program, will be subjected to applying for an ETIAS when travelling to San Marino as of 2021.

Although Canada and San Marino established official relations as early as 1960, it was only in 1997 that the two nations intensified their relationship with a full diplomatic agenda. Since then, the Canadian Embassy in Rome has represented Canadian interests in San Marino. Meanwhile, San Marino is represented in Canada by the Sammarinese deputy representative in New York.

As the main bilateral agreement signed between San Marino and Canada was the youth-mobility program of 2016, which grants Canadian and San Marino citizens with a working-holiday permission for one year. In 2011, the governments of Canada and San Marino also agreed to exchange tax information in commercial relations between both countries.

After 4 years of development, the Canadian government introduced the eTA (Electronic Travel Authorization) in 2016, as a means to mitigate terrorist attacks and manage illegal immigration. Once this new border control system came into force, travellers from San Marino were asked to submit an eTA application when visiting Canadian territory for less than 90 days in every 180-day period.

Similarly, European countries also saw the need to restructure their entry/exit regulations after the increase of terrorist attacks in EU territory. As of 2021, the European Commission will introduce the ETIAS in all Schengen Area, including San Marino. Therefore, Canadian citizens travelling to Europe for short-term tourism or business trips will be required to apply for an ETIAS at least 72 hours before boarding a plane or bus to Schengen territory.

The ETIAS response will be sent to the applicant’s email address in an average of 72 hours.

The Embassy of Italy in Ottawa, Canada