Sweden is one of the EU Scandinavian countries, located to the north of the European continent and cut by the Arctic Circle. The territory of Sweden borders two Schengen nations – Finland and Norway – as well as the Baltic Sea and the Strait of Kattegat.

Despite being situated near the Arctic, most of Sweden experiences a temperate climate, while in the mountainous region of the north, the climate is the subarctic. In general, the topography of the Swedish territory is flat, the highest peak is Mount Kebnekaise, with 2,117 meters of altitude.

Due to its participation in both the European Union and the Schengen Agreement, Sweden occupies a prominent place among the European economies. Sweden’s main economic sector is services, especially telecommunications and information technology. After joining the Schengen Zone, the tourism industry also developed, making Sweden one of the most popular travel destinations in Scandinavia.

Sweden is the largest of the Scandinavian countries and is known worldwide for hosting the Nobel Prize, bringing up ABBA, as well as being the home of filmmaker Ingmar Bergman and IKEA. Plus, being a Scandinavian nation, Sweden is often associated with Vikings.

Most travellers who come to Sweden start their trip by exploring the labyrinth of islands in Stockholm, its capital, with its fantastic museums and the historic district of Gamla Stan. Another touristic highlight in Sweden is the city of Gothenburg and its cosmopolitan air or vibrant Malmö. 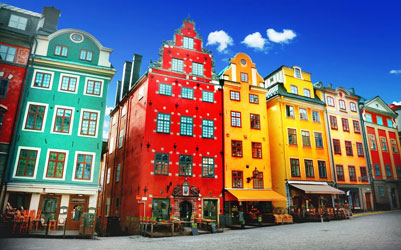 As a part of the Schengen Area, EU passport holders and nationals of countries which are enrolled in the Schengen visa-waiver program don’t need to apply for a visa to visit Sweden. The main international ports of entry into Sweden are the airports of Gothenburg and Stockholm (Arlanda), which are connected with most of Europe’s largest cities. Alternatively, Swedish cities are also accessible by ferry, train, or buses from other EU countries like Germany or Estonia.

Sweden, Finland, and Austria joined the European Union in the 1995 enlargement of the EU. In 1996, all Scandinavian countries, including Sweden, signed the Schengen Agreement and by 2001 Sweden became a part of the Schengen Area. 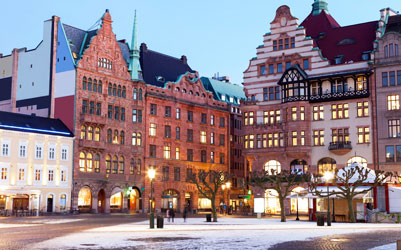 As a major EU economy, Sweden is an active player on all discussions around Schengen and EU policymaking. Hence, when talks for a new entry-exit system emerged following the terrorist and immigration crisis of 2015 2016, the Swedish government took a leading role on negotiations.

After receiving enough votes, the European Commission announced in 2016 that it would implement a new system – named ETIAS – across the Schengen Zone. The aim of the ETIAS will be to reduce the risks of terrorist attacks by identifying individuals who may present a security threat prior to their arrival in Europe. Another objective of the European Travel and Information Authorization System is to manage the influx of illegal immigrants into Sweden and the Schengen territory.

Non-EU nationals who enjoy a visa-exempt policy with Sweden and the other Schengen Member States – like Canada or Australia – will have to apply for an ETIAS as of 2021. The ETIAS framework will consist of an online application, a processing fee and a waiting period of about 72 hours.

Once granted an ETIAS, Canadian applicants won’t have to apply for another authorization until its validity runs out in 3 years, or the Canadian passport expires. With a valid ETIAS, travellers from Canada will be allowed to travel in Swedish territory and other Schengen nations for no longer than 90 days in every 180-day period.

Bilateral relations between Sweden and Canada are based on cultural ties through the large Swedish community residing in Canada, as well as on shared perspectives and interests in international matters. Such social and cultural bonds promote a strong and consistent economic interaction between both countries.

Being northern nations, Sweden and Canada collaborate in Arctic-related issues and policymaking, namely in the Arctic Council. In addition, the government of Canada and Sweden work together in international institutions like the OSCE, the OECD, and the UN.

With the establishment of the CETA between the European Union and Canada, the Canada-Sweden commercial relationship has improved, and new investment opportunities arose. Besides the CETA, the Canadian and Swedish governments have created working-holiday programs for youth to work and live in the other country.

Until 2016, Swedish passport holders enjoyed a visa-free policy with Canada for tourism or business trips under 90 days. After 2016, however, Canada implemented the eTA and travel regulations for Swedish nationals visiting Canada changed. Since then, visitors are required to apply for an Electronic Travel Authorization at least 72 hours before arriving in Canadian territory.

Together with the rest of the Schengen countries, Sweden plans to introduce a similar system for Canadian citizens as of 2021. This new measure will be called ETIAS, and it is the way the EU community found to better manage its borders against terrorist attacks and illegal immigration.

The ETIAS is not a visa but an authorization. It will be a requirement for all nationals enlisted in the Schengen visa-waiver program – like Canada – allowing them to visit Sweden for up to 3 months in every 6-month period.

The Embassy of Canada in Stockholm, Sweden

The Embassy of Sweden in Ottawa, Canada

Consulate of Sweden in Calgary, Canada

Consulate of Sweden in Edmonton, Canada

Consulate of Sweden in Halifax, Canada

Consulate of Sweden in Montreal, Canada

Consulate of Sweden in Quebec, Canada

Consulate of Sweden in Regina, Canada

Consulate of Sweden in Toronto, Canada

Consulate of Sweden in Vancouver, Canada

Consulate of Sweden in Winnipeg, Canada