Switzerland is a non-EU Schengen country located in the mountainous central region of the European continent. The territory of Switzerland is surrounded by five other Schengen nations – Italy, France, Germany, Austria, and Liechtenstein.

A striking feature of Switzerland has been its neutrality with regard to international politics, not engaging in any conflict for centuries. This position was established at the Congress of Vienna in 1815, however, in 2002, the country became a member of the United Nations.

Switzerland also presents a high standard of living: the Swiss HDI is the 13th largest in the world, and life expectancy is the third largest in the world. The Swiss economy is driven by the production of watches – which are known worldwide for quality – as well as chemical, mechanical and metallurgical segments of the industry.

Another highlight of Switzerland is the international financial role that the country plays as a major banking centre. Meanwhile, tourism is mainly developed in the ski resorts located in the mountain range of the Alps.

Switzerland attracts many tourists in winter – both from Europe and abroad – who are eager to enjoy the cold amid the charm of the Alps, with plenty of hot chocolate and fondue, in the warmth of the fireplaces.

Meanwhile, summertime provides the opportunity for travellers to experience the four seasons at one go, moving from the eternal snowy peaks to lower altitudes in a short train ride. In Zurich, many residents take advantage of the hottest months to bathe in the clear waters of the Limmat River. In Bern, Switzerland’s capital, the Old Town on the embankment of the Aare River attracts visitors for its medieval architecture. 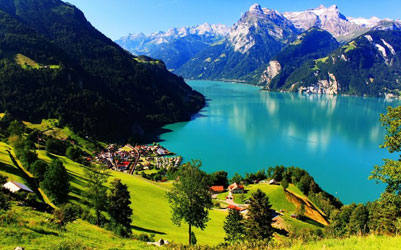 Being located in the centre of Europe and partaking in the Schengen Agreement facilitates travel for EU nationals and visa-exempt travellers who come to Switzerland. Also, its location makes it easily accessible by air or land from most EU cities like Paris, London, or Milan.

Switzerland is one of the four European countries (with Iceland, Norway and Liechtenstein) that haven’t joined the EU but are part of the Schengen Zone. After signing the Schengen Agreement in 2004, Switzerland abolished its borders with other EU neighbours and the Schengen Member States in 2008. 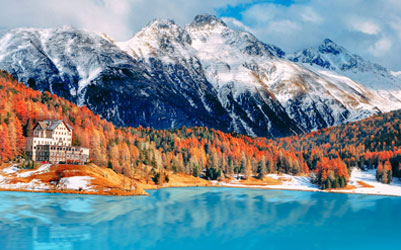 From then onward, the government of Switzerland has partaken in EU immigration-related discussions concerning the Schengen territory, updating its own border control policies accordingly. Hence, when the European Commission announced the creation of a more modern entry-exit system for the Schengen Zone, the Swiss government approved the measure.

This scheme will be called ETIAS, or European Travel and Information Authorization System and will commence in 2021. Talks for the ETIAS emerged among the EU community after the increased number of terrorist events in EU territory as of 2015, as well as the aggravation of the immigration crisis in 2016.

As the name suggests, the ETIAS is an authorization rather than a visa, and its main objective is to better manage the influx of non-EU citizens into the Schengen Area. While the ETIAS program will not affect EU passport holders travelling to Switzerland, nationals of visa-exempt countries (like Canada or Brazil) will need to apply for an electronic authorization prior to their trip to Schengen Europe.

The ETIAS will grant non-European travellers the permission to travel in Switzerland and across the territory of Schengen for up to 90 days in each consecutive 180 days. As an electronic authorization, the ETIAS system will provide a response within an average of 72 hours from the application submission.

Canada and Switzerland have established a fruitful relationship that ranges from solid commercial ties and trade agreements to the promotion of mutual values on a global scale. Switzerland and Canada have French as an official language, which brings both nations even closer together.

The governments of Canada and Switzerland often partner up in discussion and policy-making measures at international institutions like the World Trade Organization, the OSCE and the United Nations. As the cornerstone of the Canada-Switzerland relations is the cooperation in matters regarding climate change management and the promotion of human rights.

A large community of Swiss descendants resides in Canada – a feature that enhances their people-to-people relationships. Also as a way to promote cultural exchange, the Canadian and Swiss government have signed a youth mobility agreement that allows young individuals to enrol on working-holiday programs in the other country.

Being a top destination for Swiss travellers, Canada has added Switzerland to the list of eTA eligible countries. The eTA (Electronic Travel Authorization) was implemented by the Canadian government in 2016 with the aim to decrease the chances of terrorist attacks and control the inbound of irregular migrants. This electronic authorization grants Swiss passport holder to visit Canada on tourism, business or transit for no longer than 90 days in every 6-month period.

Based on the same fundaments to combat terrorism and manage illegal immigration, Switzerland and the other Schengen Member States will implement the ETIAS as of 2021. Like the Canadian eTA, the European Travel and Information Authorization System will require that travellers from Canada apply for electronic permission and pay a processing fee before they depart for Europe. Once approved, the ETIAS will allow Canadian nationals to visit Switzerland and all Schengen territory for up to 3 months in each period of 180 days.

Consulate of Canada in Geneva, Switzerland

Consulate of Switzerland in Calgary, Canada

Consulate of Switzerland in Dartmouth, Canada

Consulate of Switzerland in Quebec, Canada

Consulate of Switzerland in Toronto, Canada