Embedded in the northern part of the city of Rome, capital of Italy, the Vatican is the smallest country in Europe and the world. The Vatican City State is the seat of the Catholic Church and official residence of the pope, with its name being a reference to one of the seven hills of the Italian capital.

The population of the Vatican is made up of members of the Catholic Church as well as the select Swiss guard. However, the country receives thousands of tourists daily, the main attraction being the frescoes with scenes from the Old Testament, painted by Michelangelo on the ceiling of the Sistine Chapel. Economically, the Vatican relies on donations, capital investments and tourism revenues.

The territory comprising the Vatican was donated by Pepino (king of the Franks) in 756 AD to the Catholic Church. However, the Vatican State was officially constituted through the Treaty of Lateran and Concordat, signed in 1929 by Italian dictator Benito Mussolini and Pope Pius XI.

On the western side of the Tiber, the majestic dome of the St. Peter’s Basilica dominates the skies of Rome. Yet, this is just one of the magnificent landmarks of the Vatican City – the world’s smallest independent state and headquarters of the Catholic Church.

Travellers who come to the Vatican indulge in an array of architecturally beautiful and rich monuments and buildings, such as the St. Peter’s Square or the Castel Sant’Angelo. Other highlights are the many Vatican museums (filled with works by works by Raphael, Titian, Bellini, Giotto, Perugino, etc.) and the Apostolic Library, which features more than 150,000 books and historical records as part of its collection. 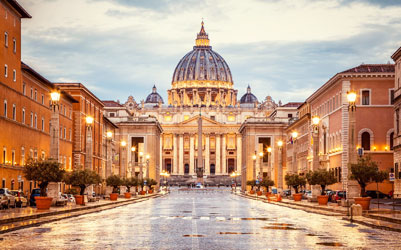 Since it lies within Italian territory, the Vatican has open borders with Italy and all other Schengen Member States, which means EU nationals can visit it without a visa. Likewise, passport holders of countries such as Canada enjoy the same visa-waiver agreement in the Vatican as other Schengen countries.

Despite being situated in the heart of Italy and the European territory, the Vatican is not a part of the European Union and instead it is considered as an independent city-state. As for its role in the Schengen Agreement, the Vatican City abolished borders with all other EU countries – much like Monaco, and San Marino did.

Because of its close relationship with Italy and its open border policy with the Schengen Member States, the Vatican abides by EU travel and immigration regulations. Hence, the country doesn’t require visas from EU nationals who travel the Vatican City. Likewise, it allows non-EU passport holders enrolled in the Schengen visa-waiver program – like Canadians or Americans – to spend up to 90 days in the Vatican territory. 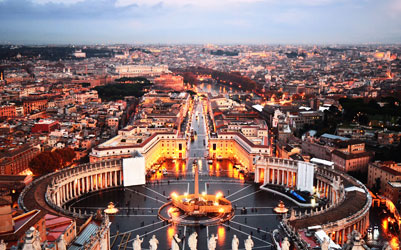 When Europe saw a wave of terrorist attacks spreading throughout its countries in 2015, the Schengen community gathered to re-think their migratory policies. One of the measures discussed by the European Commission was the creation of an electronic authorization system, later named ETIAS.

The ETIAS aims to decrease the chances of terrorist events and control the influx of irregular migrants by better managing the Schengen borders through a pre-travel application. The Vatican City State – represented by Italy – complied with the establishment of the ETIAS and will implement this new entry-exit system in its territory as of 2021, together with all other Schengen countries.

Hence, beginning in 2021, citizens of Canada and other visa-exempt countries will have to fill out an online form, pay the ETIAS processing fee and wait for an average of 72 hours before getting their authorization to travel to the Vatican.

Canada and the Vatican City began diplomatic relations in 1969 and have since then maintained close ties which are managed by the Nunciature in Ottawa. Being mostly a Catholic country, Canada recognizes and appreciates the role the Vatican plays both nationally and internationally as a sovereign entity.

The relations between the Vatican City and Canada are mostly based on a religious and sociocultural level, with the majority of political matters being addressed to the Canadian Embassy in Rome. Although only very few people hold a personal passport issued by the Vatican City State, those who do are eligible to a Canadian eTA.

Canada established the Electronic Travel Authorization in 2016 with the objective to better managed its entry-exit policies in order to prevent terrorist events and control illegal immigration. Since then, all members of the Schengen Zone – as well as independent states such as the Vatican – have been required to submit an eTA application prior to visiting Canada for touristic purposes.

In contrast, Canadian passport holders who have long enjoyed a visa-free policy with the Schengen Area will be asked to apply for an ETIAS when travelling to the Vatican after 2021. The ETIAS will work similarly to the Canadian eTA, grating applicants from Canada the permission to stay in the Schengen Territory – including the Vatican – for up to 3 months in every -month period.

The Embassy of Austria in Ottawa, Canada